In Turkey, everyone knows SKYLIFE magazine presented by Turkish Airlines (THY) to its customers in its flights. Parallel to the increase in the number of international flights and lines of THY in the recent years, the magazine has even become known more also by non-Turkish people.

After being published under the title “Türk Hava Yolları Magazin” (Turkish Airlines Magazine) between 1983 and 1989, the magazine has been renamed as “SKYLIFE” in December 1989, and is being continuously published since that date. Archive containing all issues of the magazine published bilingually in Turkey and English may be retrieved from https://www.skylife.com/en/archive in English and from https://www.skylife.com/tr/arsiv in Turkish.

It is surely beyond doubt that with its contents, the “SKYLIFE” magazine is a prestigious publication on the part of THY. But still do you know that “Skylife” trademark has already been partially invalidated by a court decision in the European Union on January 27, 2021?

We guess your answer is “No”, and now, we are going to report the milestones of this case.

THY registered its “Skylife” trademark at the European Union Intellectual Property Office (EUIPO) in 2006. 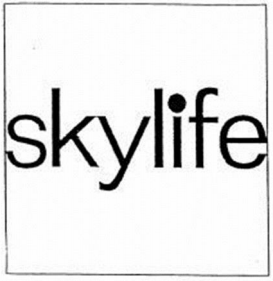 Before the end of five years after the date of registration of the trademark, “Sky Ltd” filed an application with EUIPO for a declaration of invalidity of that mark, in particular, in respect of the services referred to in the preceding paragraph.

The application for declaration of invalidity was relied upon the alleged likelihood of confusion with the word mark “Sky” which was already registered in EUIPO since the year 2003 and which covered: “Class 16: Printed matter, and Class 41: Training, education and entertainment services.”

Thereupon, THY has filed a notice of appeal with the Board of Appeal of EUIPO against the aforesaid decision of the Cancellation Division.

EUIPO Board of Appeal dismissed the appeal in April 2019 in reliance upon the following grounds:

Taking these points into consideration, the Board of Appeal upheld the decision as to existence of the likelihood of confusion, and in addition, rejected THY’s arguments relating to the specific methods of use and the alleged reputation of the contested “Skylife” mark.

THY brought the case to the General Court of the Court of Justice of the European Union. The Court issued its judgment on January 27, 2021 (Decision no. T-382/19).

THY claims that the Court should annul the decision of the Board of Appeal, and order EUIPO to declare the registration of the contested “Skylife” mark valid in EUIPO. In support of its action, THY puts forward two pleas:

1- There exists no likelihood of confusion between the marks at issue within the frame of article 8(1)(b) of the Regulation (EU) 2017/1001 on the European Union trade mark.

2- The “obligation to state reasons” as envisaged in article 94 of the same Regulation has been infringed.

The General Court examined the second plea in the light of provisions of article 94 (1) of the Regulation no. 2017/1001, and expressed that paragraphs 17 to 37 of the decision of the Board of Appeal has indeed clearly set out the reasons underlying its finding of the existence of a likelihood of confusion between the marks at issue. Within this framework, it is concluded by the General Court that the contested decision meets the requisite legal standard, and therefore, the second plea must be rejected.

Thereafter, the General Court has examined the contestation of THY as to infringement of article 8(1)(b) of the Regulation (EU) 2017/1001 on the European Union trade mark.

THY submits that the goods covered by the contested “Skylife” mark are offered to passengers of flights, who, by definition, display a particularly high level of attention, which excludes any likelihood of confusion, and that such a likelihood can also be excluded given the different nature of the “printed matter” in Class 16, covered by the earlier mark, and the “publication services” in Class 41, covered by the mark applied for.

THY also argues that it does not offer for sale the subject printed matter to passengers on its flights, but offers only complimentary publications as a part of its main air transport service provided under two other trademarks and a well-known logo.

THY adds that it has been using the contested mark since 1989, which is a proof of peaceful coexistence that excludes any likelihood of confusion and demonstrates that the holder of earlier mark should be regarded as time-barred from requesting a declaration that the contested mark is invalid.

Moreover, THY states that, given the figurative nature and the length of the contested mark, it does not have a particularly high level of similarity with the earlier mark. Furthermore, the presence of the term ‘life’ in the contested mark makes the marks at issue phonetically and conceptually different. According to the applicant, unlike the contested mark, the earlier mark has only a weak distinctive character, which, combined with the ability of the public of the European Union as a whole, and not only English-speaking consumers, to perceive differences between the two signs, excludes any likelihood of confusion.

According to the General Court, contrary to the applicant’s claims, for the purposes of assessing whether there is a likelihood of confusion, only the description of the goods in respect of which registration of the mark was sought is relevant; the intended or actual use of that mark cannot be taken into account, since the registration does not contain a restriction to that effect. Therefore, it is argued by the General Court that the arguments put forward by the applicant, alleging that any likelihood of confusion should be excluded on account of the use of the contested mark in air transport services, are based on a false premises.

Moreover, according to the Court, it should also be noted that, contrary to the applicant’s claims, the Board of Appeal did not err in finding that “publication services for magazines, books, journals and other printed matter” are similar to “printed matter” because of their direct complementary links.

As regards the similarity between the marks at issue, it must be stated that, although THY notes certain differences linked to the presence of the word ‘life’ in the contested mark and concludes that the degree of visual similarity ‘is not particularly high’, the General Court has underlined that this finding is, in essence, the same as that set out by the Board of Appeal in its contested decision, which states that the marks at issue have ‘at least an average degree’ of visual similarity.

According to the General Court, the Board of Appeal’s assessment that the marks at issue are phonetically similar to an average degree is also correct, and since those marks share the word ‘sky’, the term ‘life’ of the contested mark does not suffice, contrary to the applicant’s assertion, to rule out any phonetic similarity.

It is further asserted by the General Court that it is also the case from a conceptual point of view. The marks at issue share the concept of ‘sky’, whereas the word ‘life’ refers to a concept which may define sky as “an area capable of accommodating living beings, such as birds or even passengers of a flight”.

As regards the global assessment of the likelihood of confusion, according to the assertions of the General Court, the identity and similarity of the goods and services covered by the marks at issue, combined with the average degree of visual, phonetic and conceptual similarity between those marks, is sufficient to establish, in view of the normal distinctiveness of the earlier mark, a likelihood of confusion with regard to the English-speaking public of the European Union.

In that regard, it is stated by the General Court that the fact that the word ‘sky’ refers to an area does not, in itself, mean that the earlier mark is not distinctive for the goods and services described hereinabove.

Second, the assessment of any likelihood of confusion must be made by taking into account the signs as they were registered or as they appear in the trade mark application, regardless of whether they are used alone or together with other marks or indications. It follows that, contrary to the applicant THY’s claims, the possible use of the earlier mark in conjunction with other marks, whether of a reputation or not, belonging to the applicant, is a criterion that is irrelevant for the purposes of assessing whether there is a likelihood of confusion in the present case.

It is apparent, from the statement setting out the grounds of appeal brought before the Board of Appeal that the applicant THY did not raise the question of possible limitation in consequence of acquiescence. As declarations not made before the Board of Appeal can by no means be taken into consideration in the proceedings in the General Court, an argument pertaining thereto cannot be examined or dealt with by the General Court.

For the reasons and on the grounds described in details in the preceding paragraphs, the General Court has dismissed the action and upheld the decision of the Board of Appeal.

The decision of the General Court partially declaring invalid the contested mark “Skylife”, which is one of the prestigious products and services of THY and thus of Turkey, is disappointing on the part of THY, especially if and when it is considered that the pleas of THY presented in and before the Board of Appeal were deficient by nature, and also that some of these pleas have not even been examined by the General Court because they have not originally been submitted during the proceedings before EUIPO. In our opinion, the most important lesson to be derived herefrom is the fact that it is once more proven by experience that one can more seriously get prepared for legal proceedings only if and to the extent it files a full and complete application of contests and pleas to the Board of Appeal.

In order for you to make the most of our site, we position cookies for limited purposes and in accordance with privacy. To remember your preferences and improve your experience on the siteCookie PolicyWe recommend that you accept it.Ok
Manage consent

This website uses cookies to improve your experience while you navigate through the website. Out of these, the cookies that are categorized as necessary are stored on your browser as they are essential for the working of basic functionalities of the website. We also use third-party cookies that help us analyze and understand how you use this website. These cookies will be stored in your browser only with your consent. You also have the option to opt-out of these cookies. But opting out of some of these cookies may affect your browsing experience.
SAVE & ACCEPT
Loading...